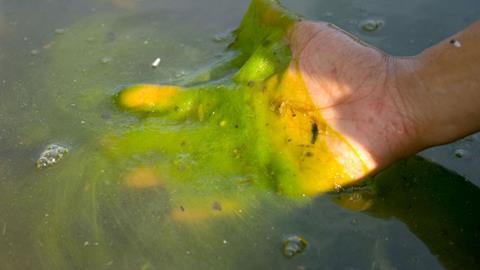 On a hot summer’s day, a dip in an open air lake or pond can seem like a great way to cool off. And although we may be wary of the dangers beneath the surface, sometimes, it’s the stuff floating on the top that is the biggest risk. Here’s Gege Li. 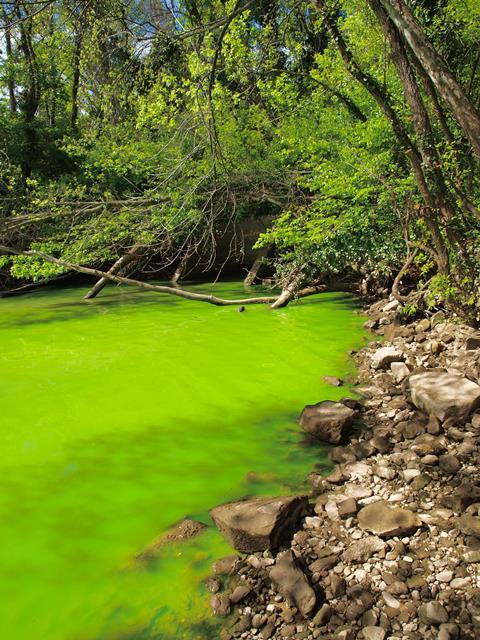 Eutrophication at a waste water outlet in the Potomac River, Washington, D.C.

A teenager goes for a seemingly harmless dip in the local pond with his friends in Wisconsin. 48 hours later, he suffers convulsions and a seizure and eventually dies of heart failure. The circumstances of Dane Rogers’ death back in 2002 remained mysterious until the coroner found that the 17 year old boy had taken in several mouthfuls of water while wrestling and playing in the apparently ‘scummy and dirty’ pond. This scum, probably enough to set off alarm bells in itself, was actually an algal bloom, and might have been responsible for killing Rogers and giving his decidedly more fortunate friend diarrhoea and abdominal pain. But what made it potentially lethal?

Blood and stool samples revealed that something sinister could have been lurking in the pond: a potent neurotoxin called anatoxin-a. Produced by several species of blue-green coloured cyanobacteria including Oscillatoria (technically not algae at all but photosynthetic prokaryotes), anatoxin-a used to be known by a name that helped cement its reputation as a killer: Very Fast Death Factor, or VFDF. It earned this name after blooms on lakes across North America were held responsible for wiping out the cattle who were drinking from the water in a mere hour – instead of over the course of several hours or days like most other toxins. As well as being found in drinking water, this bicyclic alkaloid – containing a core homotropane moiety with a secondary amine – can also find its way to us through contaminated food and skin contact while swimming. Luckily, it has a short half-life. 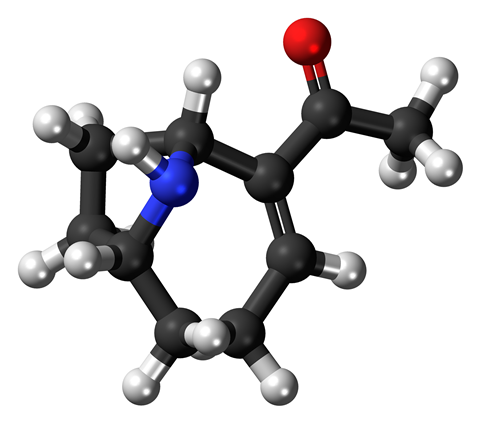 But despite numerous and well-documented cases of anatoxin-a toxicity on mice, cows and dogs, in the end medical investigators weren’t able to conclusively determine whether it killed the Wisconsin teenager. They had no previous human anatoxin-a related deaths to compare it to, and the lethal dose of anatoxin-a for humans hasn’t and still can’t be determined, though it ranges from 10 to 40mg per kilo of bodyweight in other animals. The time elapsed between the boy’s swim and death could rule out this speedy-acting toxin as the culprit, although this was the only puzzling fact standing in the way of a firm verdict – theoretically the amount of anatoxin-a from the samples was enough to cause a rapid death.

Whether it’s a killer of men or not, one thing that is clear is that we shouldn’t let ourselves get too relaxed when it comes to anatoxin-a. Environmentally, it contributes to eutrophication and is highly toxic to fish populations, and its presence in drinking water across the world poses a very real health hazard. Symptoms of poisoning can be pretty unpleasant, with muscle tremors, convulsions and respiratory failure being just a few of the ways it demonstrates its dangerous effects. The common feature here is loss of muscle control, which happens when anatoxin-a binds to receptors in the synaptic cleft between neurons in place of the neurotransmitter acetylcholine.

In the short term, this rogue binding isn’t any different to the norm – it causes sodium and calcium channels to open, which triggers an electrical signal leading to muscle movement. But anatoxin-a becomes permanently attached to the receptor, and that is the cause for concern. The enzyme acetylcholinase that usually switches off acetylcholine can’t cleave the toxin to stop the response either, leading to a build-up of neurotransmitter and – inevitably – over-stimulated and paralysed muscles. 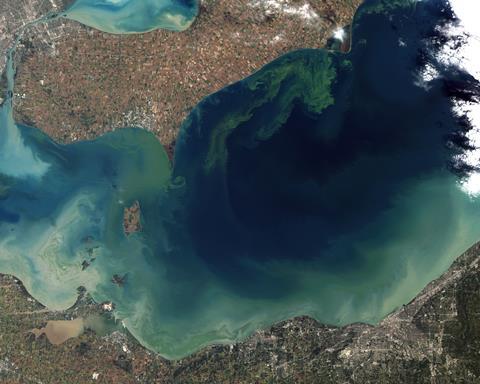 The green scum shown in this image is the worst algae bloom Lake Erie has experienced in decades. Vibrant green filaments extend out from the northern shore.Image captured by the Landsat-5 satellite. Data provided courtesy of the United States Geological Survey.

As scary as this all sounds, it might not in fact be such a terrible thing (and that’s definitely not a suggestion to start advocating anatoxin-a induced deaths). The toxin could actually be a viable candidate for treating Alzheimer’s. The key to its success lies in the exact mode of action that can prove so dangerous for the unsuspecting individuals that ingest it. By inhibiting acetylcholinase, anatoxin-a can compensate for the drastic loss in acetylcholine – sometimes up to 90% – that Alzheimer’s sufferers experience. If we can reduce its toxicity, this classically-deadly toxin has the exciting prospect of opening up doors for combating neurodegenerative diseases.

And we don’t have to look for scummy ponds to find the toxin. Due to their similar stereochemistry, the ideal precursor for biologically synthesising anatoxin-a is cocaine, a feat that was accomplished in 1977. 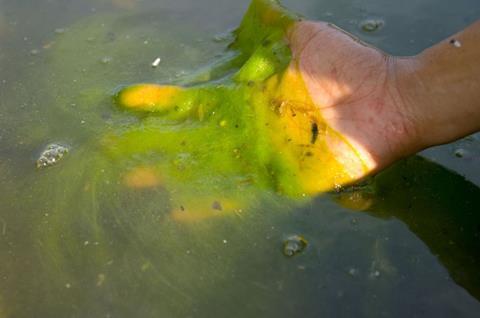 In the meantime, anatoxin-a in the wild continues to endanger wildlife, livestock and pets. Treatments for contaminated water are lacking since conventional chlorine can’t oxidise the toxin effectively, though activated carbon is looking promising as an alternative. This isn’t to say your next glass of water is going to kill you, but do perhaps refrain from letting your dog (or yourself) drink from a pond that’s covered in a suspicious amount of algae…

That was Gege Li with anatoxin-a, once known by the no-nonsense name ‘very fast death factor’. Next week, a biological oil with a biblical background.

In 2012, a team of scientists in Israel reported the results of research on ‘the biblical balm of Gilead,’ as they called it. Their aim was to study the anti-cancer activity of the oil. They identified 27 components, the most prominent of which was the hydrocarbon β-caryophyllene.

Join Mike Freemantle next week to learn more about caryophyllene and the balm of Gilead. Until then, you can get in touch by email – chemistryworld@rsc.org – or find us on twitter, where we’re @chemistryworld. I’m Ben Valsler, thanks for joining me.