We speak to the ‘sultan of synthesis’, Phil Baran, and Peter James explains how labs can save cash on energy bills 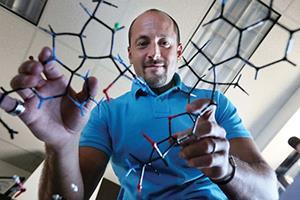 0.45 – Useful small molecules with potential applications in the cosmetics and fine chemical industries have been recovered from waste plastics by scientists in the US. Waste plastics unzipped into useful chemicals

3.05 – From orange peel and coffee grounds to gases from factories, waste is inevitable. But rather than seeing waste as a problem, the government should consider it a valuable resource, says a report by the House of Lords Science and Technology Committee. UK government urged to cash in on waste

7.56 – We speak to Phil Baran, who is spurring organic chemists to rethink how they make complex compounds. The sultan of synthesis

16.32 – Removing salt and soot deposits from historical stone monuments and buildings just got a lot simpler thanks to Italian researchers who have developed a cleaning method that uses harmless agar gel to absorb dirt like a sponge. Agar gives Milan’s cathedral a sponge down

20.13 – Some universities are declaring chemistry lab energy bills that exceed £1 million per year. Peter James of S-Lab helps labs to find ways to save energy, water and ultimately money. It’s even cheaper being green

25.28 – In 1914, Stanley Rockwell and Hugh Rockwell patented a new method for testing a material’s hardness that would transform the newly invented assembly line. Rockwell’s tester

29.05 – Larger research groups are perhaps an inevitable consequence of ‘big’ science, but we should be considering the consequences. Family values