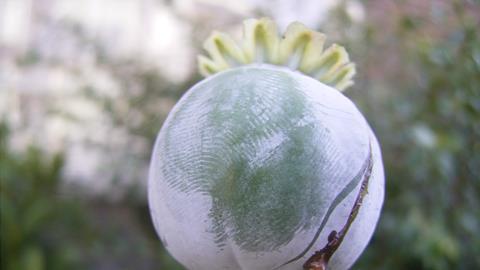 This week, some pain relief provided by nature and brought to you by Simon Cotton:

Nobody does synthetic organic chemistry better than nature. Plants make molecules known as secondary metabolites using a series of enzyme controlled reactions, with a speed only dreamed of by the men and women in white coats, to whom the complex structures of the molecules are a perpetual challenge. One such secondary metabolite, obtained from an unassuming variety of poppy, has long attracted the attention of humanity.

Named Papaver somniferum by Carl Linnaeus 250 years ago, the opium poppy certainly lives up to its 'sleep-inducing' title. If you cut open the seed pods of the common poppy before they ripen, they exude a creamy coloured sap, which contains a mixture of perhaps 50 different alkaloids - molecules made by the plant from amino acids. The sap dries to a yellow-brown paste. This is opium. And one of the most abundant compounds present in opium is morphine, the substance that sets the standard by which all painkillers are judged.

Poppy seeds themselves are commonly used in food and often decorate bagels or muffins. Indeed, people have tested positive for morphine in drug tests, when all they've done is to eat a poppy seed cake.

Over 5000 years ago, Mesopotamians had discovered some of the euphoric properties of opium. By the time of the Greek and Roman civilisations, people were also familiar with its pain-killing effects. It was probably Paracelsus, the famous 16th century alchemist, who first created the alcoholic solution of opium known as laudanum, which became a widely-used over-the-counter medicine.

Some people became addicts, though. In 1821, the English essayist Thomas de Quincey published the Confessions of an English opium-eater, which does exactly what it says on the tin: telling the story of both his drug enjoyment and addiction. Eight years later, the great French composer Hector Berlioz launched on the world his Symphonie fantastique. A habitual opium user himself, and a reader of de Quincey's magnum opus, Berlioz wove a plot in which an opium overdose creates a fantastic dream world. Berlioz and de Quincey were not the only artists to use opium: others included Baudelaire, Byron and Keats, and it may have inspired Wilkie Collins and Samuel Taylor Coleridge to write their works The Moonstone and Kubla Khan. 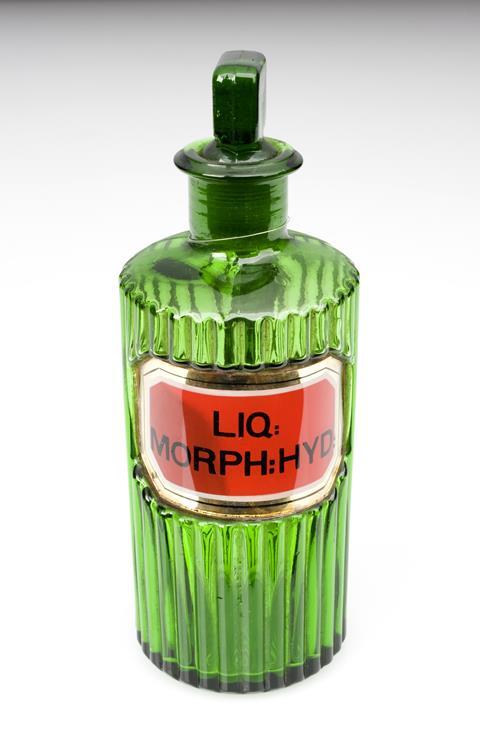 At the start of the 19th century, several chemists isolated pure morphine from opium, giving doctors an even more powerful painkiller. The German pharmacist Friedrich Wilhelm Sert?rner usually gets the credit for this, thanks to the publicity he got from the French chemist and physicist Joseph Louis Gay-Lussac, who had Sert?rner's paper translated and published. Morphine is thought to exert its effects in the body by binding to the mu-opiod receptor in the brain, causing analgesia and sedation. It is because of its sedative properties that morphine is named after Morpheus, the Greek god of dreams.

The hypodermic syringe was invented just in time to enable medics to use it to inject morphine into battle casualties of the American Civil War; some estimates suggest that 400,000 Civil War veterans became addicted to morphine as a result. At the same time, Britain twice went to war with China to maintain the opium trade, which one can safely say was not the high point of 19th century British foreign policy.

In the late 19th century, chemists working at the German pharmaceutical company Bayer created aspirin by adding an acetyl group to salicylic acid. When they played the same trick on morphine, they obtained diacetylmorphine, better known today as heroin. Named for its 'heroic' properties, heroin was first marketed as a cough suppressant and, ironically, as a cure for morphine addiction. This optimistic name proved to be misplaced, however. Although heroin is inactive in the body, it crosses the blood-brain barrier faster than morphine and is subsequently metabolised there to produce morphine. This gives the user the intense 'rush' that makes heroin so addictive. Today, heroin addiction affects millions of people around the world and claims thousands of lives every year. Heroin's victims include many high-profile names from the entertainment industry: Paula Yates, Jim Morrison, Gram Parsons and Janis Joplin all died of heroin abuse, while River Phoenix and John Belushi were victims of the heroin-cocaine concoction known as speedballs.

Under its other name of diacetylmorphine, heroin can still be prescribed by doctors for treatment of severe pain, especially in the terminally ill. For Dr Harold Shipman, though, it was his chosen vehicle of despatch for his victims, maybe over 200 of them.

On the way to making morphine, poppy plants create codeine. Scientists are now trying to interrupt this metabolic pathway to engineer a poppy that makes only codeine. This would have a double-whammy effect, as it would make codeine cheaper and also reduce the availability of morphine for heroin synthesis. The opium poppy is useful for much more than recreational drugs.

So, using science to steer us away from the addictive compunds of morphine to its more medicinally useful precursor, codeine. That was Birmingham University's Simon Cotton with the pain-relieving chemistry of morphine. Now, next week: a compound discovered by a chemist who could have changed the works of Shakespeare.

Eye of newt, and toe of frog,
Wool of bat, and tongue of dog,
Adder's fork, and blind-worm's sting,
Lizard's leg, and howlet's wing,
For a charm of powerful trouble,
Like a hell-broth boil and bubble.

And to find out the chemistry of the compund identified in Ray's broth, formic acid, and how this could have helped the three Shakespearean witches, join Duncan McMillan in next week's Chemistry in its element. Until then, thank you for listening. I'm Meera Senthilingam.