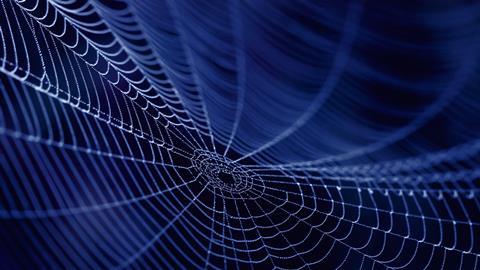 From tacky Hallowe’en decorations to the stuff of an arachnophobe’s nightmares, spiders don’t have the greatest reputation. But, as Kat Arney is here to prove, there’s fascinating chemistry at work in their webs.

Inside a house they’re a messy nuisance, cluttering up corners or clinging to the light fittings. Outside, they might be strung across footpaths to snare passing insects or unwary walkers. But before you brush away that web in disgust, spare a thought for the amazing properties of spider silk – a natural substance that is pound-for-pound stronger than steel, tougher than bulletproof Kevlar, can withstand a temperature range from 200 Celsius down to minus forty, and can stretch up to five times its length without breaking. Yet rather than being forged in a furnace or moulded in a factory, spider silk is made in a much less glamorous way: created from a sloppy mixture of proteins that comes out of a spider’s backside. 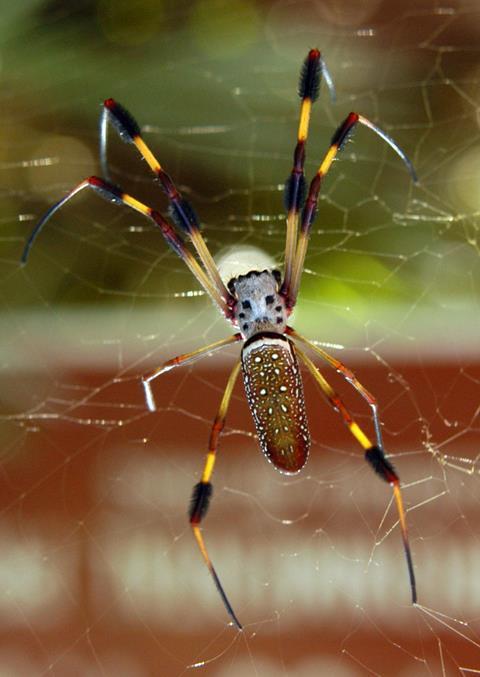 The key component of the strongest form of spider silk, known as dragline silk, is the protein spidroin. Or to be more accurate, there are several spidroin proteins encoded by separate genes. The first spidroin gene, Spidroin I, was found in 1990 and the second two years later, imaginatively named Spidroin II. Both came from an American species of golden orb-weaver known as Nephila clavipes, or banana spider, and since then a further two minor spidroin genes have also been found.

Spidroins are big by molecular standards - around 3,500 amino acids in each molecule, with the largest weighing in at 300 kiloDaltons - and each species of spider makes slightly different versions depending on their underlying genetic makeup.

Although all spiders make silk, not all spin webs. And most spiders make multiple types of silk, unlike silkworms and silk-producing caterpillars that make just one. Arachnids use their silk for a whole range of purposes, including protecting their eggs, having sex or flying through the air – a trick known as ‘ballooning’ or ‘kiting’. They can even eat it if they’re in need of a quick snack. In fact, orb weavers make no less than six types of silk, each from a specific gland in their body and made of a slightly different mix of proteins and other molecules. But how do they turn this watery protein mix, known as ‘spinning dope’, into gossamer-fine silk? 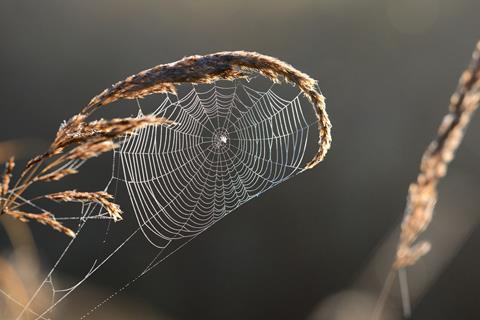 The secret to the spider’s silk-spinning skills was revealed in 2014 by a team led by Swedish spiderologists Jan Johansson and Anna Rising. After carefully inserting tiny electrodes into the silk glands of golden orb-weavers, they discovered that the pH drops dramatically from the start of the gland containing the watery spinning dope to the exit point where strong, structured silk emerges.

This pH gradient causes the disordered, floppy spidroin proteins in the dope to become stable and stiff, lining up and clinging together to make the organised protein structure found in silk. Intriguingly, the acidity change affects each end of the spidroin protein differently. One end becomes more stable as the pH falls, enabling it to grip firmly on to other fibres. The other end becomes more disordered, which helps the spidroin fibres wrap smoothly together as the silk strand forms.

Spider silk’s impressive structural properties have caught the eye of materials researchers, keen to harness spidroin’s superpowers. There’s also interest in medical uses such as bandages, as the silk is naturally antimicrobial and biodegradeable.

But unlike silkworms, which can be easily cultivated and produce long, unbroken strands of silk, it’s very difficult to farm spiders and make them produce webs to order. And although it is possible to ‘milk’ the silk from a spider, it’s certainly not an easy job. There’s also the challenge of spinning synthetic spider silks. Scientists are working on building mechanical spinners, but it’s extremely difficult to mimic the precision spinning apparatus of a living spider, honed by millions of years of evolution. 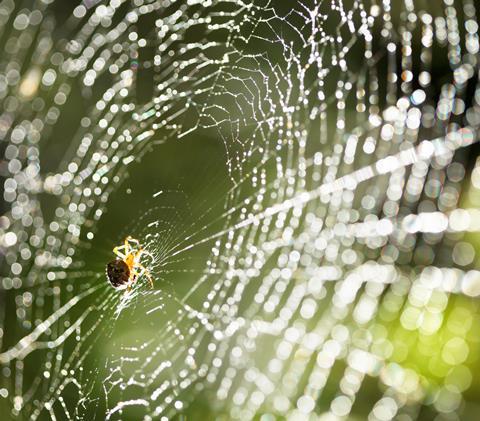 In search of solutions, scientists have turned to genetic engineering techniques. Over recent years this has led to mass-produced spider silk for applications ranging from clothing and footwear to bulletproof vests.

One approach has been to tweak the genes of silkworms so they make spidroin rather than the normal silk protein fibroin. Another idea is to produce spidroin in E. coli bacteria, which can be easily grown in bulk in the lab. For a long time this was hampered by the fact that the large, repetitive chemical structure of spidroin makes it tricky for the bugs to produce.

Other researchers have engineered tobacco and potato plants that produce spidroins. And finally there’s my personal favourite: spidergoats, which have been genetically modified to produce spidroin proteins in their milk. Sadly, they don’t spin webs or scale buildings like Spider-Man, although I like to imagine they do when nobody’s looking.

That was Kat Arney untangling the science of spidroin. Next week, Brian Clegg proves that, although all that glitters is not gold, glittery compounds may still be very valuable.

It may be a simple compound of two straightforward chemical elements, and as pyrite a deceptive fake gold, but in its varied forms it shows a diversity and adaptability that makes its users anything but fools.

Brian joins us next week. Until then, get in touch in the usual ways – email chemistryworld@rsc.org or tweet @chemistryworld. I’m Ben Valsler, thanks for joining me.