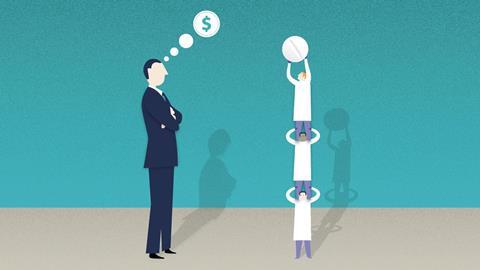 Deal or no deal?

In June 2016, biotech journalist Bruce Carlson predicted, in the biotech trade paper Genetic Engineering & Biotechnology News, that within five years half of all drug discovery activities may be contracted out from one company to another. Intercompany contracts and collaborations can take many forms, ranging from simply licensing a technology or a compound series to acquiring a company with appropriate expertise outright.

US industry body Pharmaceutical Research and Manufacturers of America (PhRMA) has estimated a cost of $0.8 to $1.7 billion (£0.6 to 1.3 billion) at 2016 prices to take a drug from concept to clinic. The bulk of this spending occurs towards the end of the process, in clinical trials. Only the largest multinational companies can afford to take a new drug through advanced clinical trials with large numbers of patients, and these large companies are often not best placed to do the specialised research that early-stage drug discovery involves. Hence the popularity of strategic collaboration between companies: sometimes even companies that might ordinarily be expected to be bitter rivals. And looking at the number and range of intercompany deals in the pharma and biotech industries today it is clear that companies are willing to spend an enormous and growing amount of money on finding the right deal, as well as on the deal itself.

In the 1980s and 1990s, when deals between companies first became an important part of the drug discovery landscape, there was a common pattern. A large pharma company would identify a particular technique or a set of promising small-molecule drug candidates that had been developed by a smaller biotech and readily acquire either the asset or the company. ‘From a biotech’s point of view, deal-making at the end of the last century was like dancing with a bear: you would just go wherever the bear wanted you to,’ says Mike Ward, chief content officer at Datamonitor Healthcare & Scrip Intelligence in London, UK. ‘Relations between large and small companies are now more equal, and a much wider range of deals can be on the cards.’

Deal-making at the end of the last century was like dancing with a bear: you would just go wherever the bear wanted you to

One important reason for this change is the relative decline in importance of small-molecule drugs compared to protein-based therapeutics or ‘biologics’. ‘All large companies founded before approximately 1990 were built on a solid background of chemistry with as time went on more and more knowledge of their molecules’ mechanisms of action,’ says Ward. ‘Once the potential of proteins and monoclonal antibodies as drugs had been recognised many realised that it would be more efficient to buy in or collaborate with companies working with the ‘new biology’ than to acquire the same skills in-house.’ And, although small molecules are still – and probably always will – providing important new drugs, the early 21st century is becoming the age of the biologic. The highest-selling pharmaceutical product of 2016, AbbVie’s immunosuppressant drug Humira is a monoclonal antibody that binds specifically to the cytokine TNFα, preventing it from binding to its receptors and stimulating inflammation. Humira is used to treat autoimmune diseases including rheumatoid arthritis, psoriasis and Crohn’s disease, and AbbVie estimates that its sales in 2016 will amount to over $16 billion. Six more of the drugs in Datamonitor Healthcare’s top 10 list for 2016 are also protein-based biopharmaceuticals.

Deals can also be driven by the search for combinations of drugs to tackle the same disease. So-called highly active antiretroviral therapy (HAART), in which patients with HIV infection or AIDS are prescribed at least three drugs with different molecular targets, is the first and perhaps the best-known clear-cut example of combination therapy, but there is a growing realisation that other diseases, including cancer, can be effectively treated with a multi-targeted approach. ‘If you’re Bristol-Myers Squibb (BMS), with the successful anticancer antibody Opdivo in your portfolio, you will want to acquire other molecules that act on complementary targets and you are most likely to do this by doing a deal with or buying another company,’ says Ward. In fact, BMS has just done this: in August 2016 it bought the Swedish company Cormorant Pharmaceuticals and thus acquired full rights to that company’s programme to develop antibodies against the cytokine interleukin-8. This small protein is an immune suppressant that is produced by many solid tumours. Researchers and executives at BMS believe that combining an interleukin-8 inhibitor with Opdivo, which increases the capacity for a patient’s T cells to attack the tumour, will improve the efficacy of their drug.

And some companies seem to be prepared to spend whatever it takes to acquire the company, technique, compound series or other asset that they believe will enhance their drug discovery programmes. The highest-value deal of 2016 was Pfizer’s acquisition of the San Francisco-based oncology company Medivation in August for a cool $14 billion. This is almost three times as much as the total value of Pfizer’s sales in 1990. Interestingly, Medivation’s success has been largely based on traditional small-molecule drug discovery. Its lead product Xtandi is a synthetic non-steroidal androgen antagonist that is approved around the world for treating advanced prostate cancer. Pfizer chose Medivation to complement an oncology programme that was largely but not wholly based on biopharmaceuticals, inverting the association of large pharma with small molecules and small biotech with large ones that was typical a generation ago.

Looking for an equal partner

Biotech companies then no longer have to wait for a big pharma bear to invite them to dance, but can pick and choose between offers or seek deals themselves. And when they do they often favour collaborations with other biotechs over relationships with the pharma giants. Two recent deals that were presented as case studies at the Genesis 2016 life science networking conference held in London in December illustrates some interesting features of current ‘biotech-biotech’ deals. 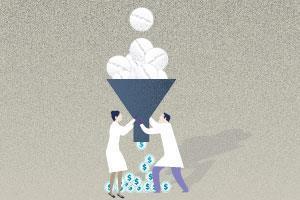 F-star, a biopharmaceutical company based in Cambridge, UK, has developed a novel technique to create antibodies that bind to two different sites with equal affinity. Normal antibodies are Y-shaped proteins with identical binding sites at the tip of each of the arms of the Y; the stem has no binding capacity. F-star’s novel but simple idea has been to engineer a second binding site at the base of the stem by introducing specific mutations into the amino acid sequence. One of these versatile synthetic ‘bispecific’ antibodies can be more effective as a drug than a combination of two antibodies with the distinct specificities.

This technology has potential therapeutic applications beyond F-star’s original focus of immuno-oncology. Antibodies that bind to proteins in the brain might have been developed before now for treating neurodegenerative conditions such as Alzheimer’s disease were it not for one very important drawback: they are far too large to pass through the tight, hydrophobic layer of cells forming the blood-brain barrier, and so they cannot naturally enter the brain. A partnership with a San Francisco, US based company Denali Therapeutics has provided a potential solution. Denali’s scientists have developed methods of altering proteins so that they bind to the blood-brain barrier transporters that allow essential nutrients to enter the brain. The deal between F-star and Denali will marry these methods to F-star’s plug-and-play bifunctional antibody technology to produce antibodies with transporter-binding sites at the tip of the stem of the Y. Jane Dancer, chief business officer of F-star, remembers the deal-making process as being ‘a bit like dating’. ‘Denali isn’t the first company to develop a technology that might enable our antibodies to cross the blood-brain barrier, but their scientists are leaders in the field’,’ she says. ‘And Denali is a young company that could afford to be nimbler than an established pharma; we completed the deal in well under a year.’

And this deal works in a rather unusual way. A technology based company such as F-star will always have concerns about tying up their technology into a partnership with a company with a specific therapeutic focus. F-star therefore chose to separate its assets into ‘vehicles’ – essentially sub-companies – focusing on different areas. The partnership with Denali is formally with a sub-company known as F-star Gamma. Whatever happens at the end of the current deal – if Denali chooses to buy F-star Gamma outright, or to licence a therapeutic product, or even if the partnership collapses – F-star’s projects in immuno-oncology and other areas cannot be affected. ‘We would prefer an outcome in which Denali buys F-star Gamma to take forward our technology for the benefit of patients with neurological diseases,’ says Dancer. ‘But if they choose to license instead, we will keep some interesting molecules to play with.’

The second deal dissected at Genesis was between two rather larger companies: the biotech giant Genentech, now part of the Roche group, and BioNTech, based in Mainz, Germany and described as ‘the largest private biotech in Europe’. Scientists at BioNTech, which was set up in 2008, have developed a unique technology to tailor cancer vaccines to individual tumours. ‘As many as half of us will develop cancer at some time in our lifetimes, and our tumours will be as unique as we are,’ explains BioNTech’s chief operating officer, Sean Marett. ‘At BioNTech we can rapidly sequence a cancer genome to obtain its unique set of mutations and produce a messenger RNA vaccine encoding these mutated proteins that can be used as a completely individual cancer vaccine.’

The partnership with Genentech, established cancer immunology experts, will enable the smaller company to develop, manufacture and test their personalised cancer vaccines on a larger scale, and to target a wider variety of tumour types. ‘We started with three potential partner companies, and began negotiations with them all in parallel,’ says Marett. ‘We eventually chose Genentech because of its global reach and its expertise in several key areas, including diagnostics and biologics manufacturing. And we were comfortable with the way the company works: despite its size it still feels like an agile, tech-driven biotech.’

Despite, or perhaps because of, the large sums of money that have changed hands, analysts such as John Carroll of Endpoints News have noticed that the number of mergers and acquisitions – self-evidently, deals in which one company takes over another – was significantly lower than predicted in 2016. Carroll noted that the prices being asked for were often so heavily inflated that buyer companies, apart from the very largest, would generally be better off seeking collaborations rather than acquisitions. Unless or until this changes, partnerships like these two case studies will be more suited to, and perhaps more popular in, the pharma and biotech market.