A new way to make and diversify metal helicate compounds has opened up possibilities for their use in drug discovery. The late-stage modification method, developed by researchers from universities in the UK and the Czech Republic, has already created a compound with enzyme-inhibiting prowess akin to that of the arrow poison ouabain.

‘We’re trying to make molecules that emulate the properties of alpha-helical peptides – short helical molecules – which are used in living systems as defense molecules,’ explains the University of Warwick’s Peter Scott.

For the last decade, Scott’s team has investigated metallohelices – compounds featuring helical ligands wrapped around multiple metal centres. This family of compounds was first developed by the Nobel prize-winning supramolecular chemist Jean-Marie Lehn in the 1980s, but it has been difficult to test their medical potential for numerous reasons. For example, it is not easy to make these compounds optically pure or soluble and stable in water – all essential features of any potential drug candidate. It has also proven difficult to synthesise libraries of related metallohelices suitable for medical screening. Now, Scott and his colleagues appear to have solved these issues.

The team had previously developed a series of iron and zinc complexes featuring three intertwining ligands. The triplex structures displayed remarkable stability and solubility in water. Working with one of these systems, the team has now applied post-assembly modifications using click chemistry to introduce chemical diversity and build up a family of 14 related metallohelices.

Daniel Preston, who researches metallo-supramolecular systems at the University of Canterbury in Christchurch, New Zealand, says there’s a lot to like about the system. ‘The chirality is imbued through the ligands themselves, making separation of enantiomers after complexation unnecessary,’ says Preston. ‘On top of that, despite the fact that the helices are formed with first row transition metal ions, they are stable.’ 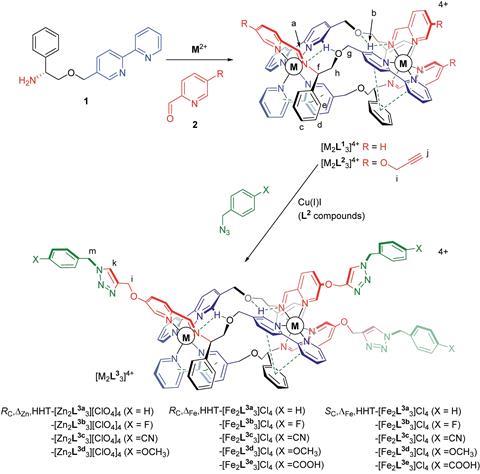 It’s ‘an elegant strategy’ comments Kristin Hutchins, who researches supramolecular chemistry and molecular design at Texas Tech University, US. ‘Importantly, the architectures remain intact throughout functionalisation, which opens the door to incorporating a variety of new functionalities via this method,’ she says.

The compounds were assessed for a range of biological activities, including their ability to target cancer cells over healthy human cells and their antimetastatic properties. This ability to screen and establish structure–activity relationships is an essential aspect of drug discovery.

‘Our Czech colleagues, led by Viktor Brabec, showed that one of the molecules that we made has some really interesting properties – we couldn’t have predicted that,’ says Scott. He explains that the compound has high selectivity for cancer cells over healthy human cells, can prevent detachment and reattachment of cancer cells – the process that leads to tumour metastasis, and can also kill cancer stem cells.

In fact, the compound was shown to inhibit the enzyme that controls sodium and potassium concentrations in cells with a similar potency to the arrow poison ouabain. And its ability to prevent cancer stem cell colonospheres from forming was comparable to the drug salinomycin. ‘It’s nice to see metallosupramolecular assemblies emerging as truly viable biological agents, as they may give access to unexplored modes of action and cellular targets,’ remarks Preston.

However, Scott urges caution: ‘At this stage, it’s obviously in a test tube – we don’t pretend to have a drug in the making here, we’re just establishing principles.’ Looking to the future, he says the group’s next aims are to gain deeper understanding about exactly how these molecules operate inside cells. Beyond this, they want to develop their platform further, to enable broader access to yet more of these compounds for further screening and tuning of their medical potential.