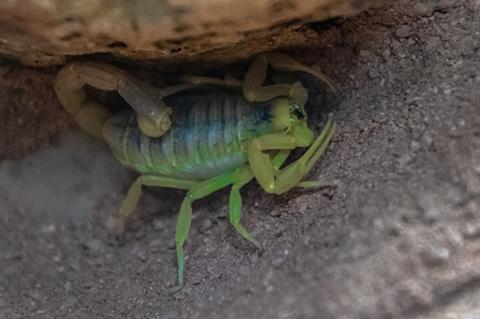 A modified version of a peptide found in scorpion venom can transport molecules across membrane layers resembling the blood–brain barrier, new research shows.1 The system, created by scientists in Spain, could serve as a way to deliver drugs for neurological conditions like Alzheimer’s disease and brain tumours.

The blood–brain barrier is a highly selective semipermeable membrane consisting of restrictive cell-to-cell connections called tight junctions. Whilst the blood–brain barrier protects the brain and central nervous system from pathogens and toxic metabolites, it also hampers therapeutic molecules from reaching them. Scientists are therefore keen to develop blood–brain barrier shuttles that increase the permeability of drugs through the fortress-like membrane without disturbing the barrier itself.

Meritxell Teixidό and colleagues from the Institute for Research in Biomedicine in Barcelona, have previously experimented with blood–brain barrier shuttles made from bee venom.2 Now they have made a new system based on a peptide in scorpion venom called chlorotoxin.

Chlorotoxin is a 36-amino acid peptide with four disulphide bridges, a feature that yields a tightly folded tertiary structure. This architecture means that chlorotoxin is resistant to protease degradation. Teixidό explains that the name chlorotoxin is a little misleading: ‘The original peptide chlorotoxin was first described as binding to chloride channels and thought to be toxic, hence its name. However, latter studies have shown that chlorotoxin is not toxic to cells and also has the capacity to preferentially bind to cancerous cells.’ 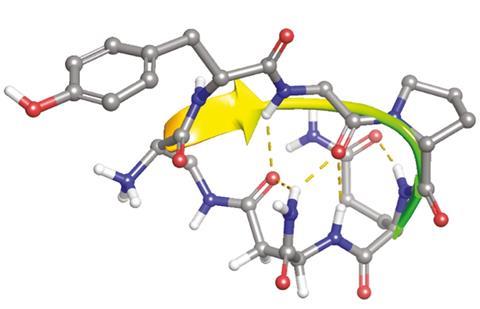 For the peptide to work as a blood–brain barrier shuttle it needed to be shorter, which also meant it was easier to synthesise – its original length had made it a challenge to synthesise. ‘MiniCTX3 is a minimised version of this sequence with six amino acids linked by an amide bond, making this peptide also very stable in front of proteases,’ says Teixidό. MiniCTX3 conjugated to gold nanoparticles was capable of crossing endothelial cell monolayers in a cellular blood–brain barrier model and Teixidό’s team showed that endocytosis initiated this transcytosis process.

Philip Dawson from the Scripps Research Institute, US, an expert at incorporating unnatural chemical groups into proteins, says ‘It is an excellent study – elegant peptide engineering of a toxin with interesting blood–brain barrier-shuttle properties. The results build and extend their earlier work with bee venom peptides.’ He adds that Teixidό’s next step should be to show that it also works in animal models, as the current research is in vitro.