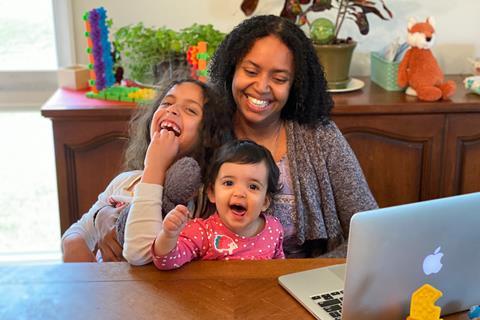 ‘Everything is on pause, honestly, which is fairly stressful,’ says protein x-ray crystallographer Krystle McLaughlin, an assistant chemistry professor at Vassar College in New York. The all-undergraduate college with less than 2500 students is about an hour-and-a-half drive north of New York City – the epicentre of the Covid-19 outbreak in the US.

McLaughlin’s lab, which uses macromolecular x-ray crystallography to study the structure and function of proteins, usually has about six undergraduate researchers.

This semester, however, because she’s on sabbatical there are no students in her lab. McLaughlin took parental leave after having a baby last summer, delaying the start of the sabbatical – which typically would have started in September – to January. It was supposed to be an opportunity to focus on research without teaching duties, but a few weeks in the Covid-19 pandemic hit New York. Vassar went to online-only learning in mid-March and labs were shut down. ‘I had grown some beautiful crystals, which are now sitting in the incubator and for all I know they are dissolved,’ McLaughlin says.

Four of her seniors’ theses from last year were close to publication and just needed some follow-up experiments and other steps to finish them. Her plan was to do that work in her lab during the sabbatical, or to get the projects to a point where students brought in under the school’s summer research programme could wrap up the work. But, McLaughlin has had to cancel the summer programme because it will be online-only and her planned work could not be done remotely.

‘So, I ended up losing this summer and my research sabbatical, which has been fairly stressful because of the whole “publish or perish” situation,’ she explains. ‘I feel like I am extra behind in a way because I didn’t get to do the summer programme last year because I was pregnant.’ She plans to try to gain that back that lost research time, possibly through a teaching course release.

Vassar has offered junior faculty a one year extension to their tenure clock without penalty, and McLaughlin – who has been at the school since 2017 – will likely accept. Normally, there is a fourth year review and then faculty go up for tenure in their sixth year, but an extra year has become attractive since she has fallen behind on her research.

There are more pressing issues right now, however. Her husband is a process engineer at a semiconductor company – a job that does not have any schedule flexibility – and they have six-year-old and 10-month-old daughters but no childcare. In fact, McLaughlin is essentially home-schooling her eldest child.

It’s not just her children that need her. McLaughlin is the advisor for Vassar’s 2021 chemistry class, who are seniors about to graduate. Many of them are reaching out remotely for her guidance and reassurance. ‘There is this kind of uncertainty about the future … it is hard to guide my students right now,’ she says. ‘I respond to emails and follow up with students as quickly as I can.’

Preparing for the fall

Luckily, her husband’s employer granted him 15 days of emergency childcare leave on 11 May, which gives McLaughlin three weeks of full-time work. She will primarily use this time to prepare for teaching next semester, as she’s developing a new physical chemistry course.

She is planning for at least a partial online reopening when the new academic year begins in September, and will record and upload lectures ahead of time. However, this new class will be very maths-heavy, and ideally there would be a way to work through problems with students synchronously. ‘I envisioned people working together in the classroom to help each other learn, but we won’t have that dynamic online,’ McLaughlin says.

She will also teach a protein chemistry course, which includes lessons on the biochemical basis of Crispr-Cas9, as well as crystallography, nuclear magnetic resonance and cryogenic electron microscopy. She has taught this discussion-based class three times before, and says usually the students feed off each other in the classroom. McLaughlin is trying to figure out how to create that small class discussion feel in an online format.

‘This will be my crunch month to try and prep as much as I can for the fall courses,’ she says. ‘Really, research is kind of secondary right now because fall is happening no matter what, whether it is online or in-person, and so that is my priority.’

Meanwhile, McLaughlin is treasuring the extra time with her family. Her baby, who had been in full-time daycare, started walking the second week they were self-quarantined. ‘I have gotten a couple of first-time moments that I didn’t even get with my first daughter because she was also in daycare,’ she says.

Originally from Trinidad and Tobago, McLaughlin plays the steel drum and has always wanted to teach her older daughter – but hasn’t had the time until now. The drum had been in the basement in storage. ‘I brought it up,’ McLaughlin says. ‘She can play half of Twinkle, Twinkle Little Star now, and that is really cool.’