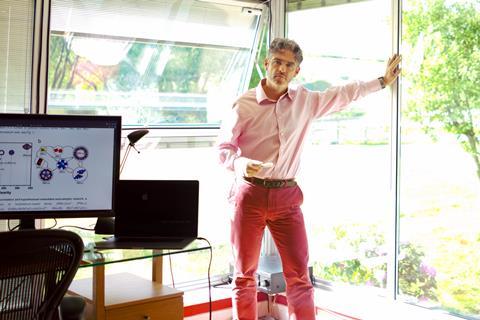 Lee Cronin, who is Regius Chair of Chemistry at the University of Glasgow in Scotland, has a research group the size of some chemistry departments, having grown to about 70 people. Because of the pandemic, the university went to remote working mode at the end of March, and the building that houses Cronin’s lab closed, along with almost all others on campus.

‘It was really sad, I took a load of lab selfies and put them on Twitter,’ Cronin recalls. ‘It was really traumatic, much more traumatic than I am really willing to go into.’

Fortunately, Cronin began making contingency plans about three weeks before the lockdown. He identified those involved in critical work who needed lab access, and those who could work from home. Cronin made sure that the first group had proper clearances to enter the lab, and that the second had the necessary electronics and hardware to telework. Some of his team have been furloughed – maintained on full pay but not working because their jobs can’t be done remotely and they’re not considered essential workers. Cronin says he is keeping in contact with everyone and is helping furloughed staff do career development training.

A group server has made the lockdown easier. ‘I don’t allow people to store data on their computer or laptop, just in case it goes up in flames or gets stolen,’ he explains. ‘Instead, I give everyone space on the server, and that server is backed up multiple times.’ There are six redundant backups – two are in Cronin’s house and there is a hand-held back up that he keeps on him.

Not completely shut down

Currently, Cronin is communicating with his researchers and his students primarily through the online platforms Zoom and Slack. The entire group meets via Zoom every Friday, and two members present their work.

Meanwhile, Cronin and several co-workers have essential worker status to ensure they can check on the laboratory infrastructure, for example to check on sensitive equipment like the NMR machine and 3D printers. In addition, there are a couple of long-term experiments, involving what he calls ‘chemical robots’, which are still running and can’t be shut down.

Cronin himself has only been into the lab a couple of times since it was closed, including once recently when one of its large computers used for artificial intelligence work was down. One of its disks was full, and he had to bring in a special disk and arrange for a repair.

Although Cronin is concerned that researchers suddenly pivoting to Covid-19 are ‘jumping on the bandwagon,’ he acknowledges that it’s a good thing if the pandemic enables scientists to think differently and in ways that lead to positive changes. He himself is dabbling, thinking about how he could fight the novel coronavirus using robots in his lab that can basically make any molecule if fed the literature.

Recently, Cronin and colleagues took the five top anti-Covid-19 drug candidates – including Gilead’s antiviral remdesivir – translated them into computer code, and put them onto GitHub, a web-based code hosting platform. ‘I did think about starting up one of the chemputers to get remdesevir made, just to show that we could do it robotically,’ Cronin recounts, referring to the modular chemical robot chemputer system he designed and developed a few years ago. Cronin says he hasn’t yet gone ahead with the idea, however, because ‘proper Covid research’ into things like diagnostics and testing should take priority at the university.

Researchers in his lab are divided into six teams, each with appointed leaders, and during the lockdown they all check in with their leader each morning via Zoom at 9:30 sharp. That’s part of a set of 10 ‘Covid-mode’ guidelines that Cronin drafted. Another item on that list is to try something new, and Cronin has asked his group members to allocate at least 25% of their time to an activity relevant to their work skills but nothing to do with their research projects.

Self-quarantined at home in the countryside north of Glasgow with his wife and two sons aged 11 and 14, Cronin is taking the opportunity to tackle the big topics that he finds most fascinating.

‘I want to actually ask interesting questions, and I have been fooling myself for the last 10 years that I am going to have time to do this,’ he says. With more time than ever now, he’s pursing ambitious essays. At the moment, he’s writing about ‘the chemical basis for no free will’, which he plans to publish and use as the basis for developing a new type of AI that he has dubbed ‘chemical AI’.

Cronin has also taken up several hobbies, including cycling, since he can no longer run his usual five miles a day after recently tweaking a nerve in his right knee and damaging his foot. He is also pursuing astrophotography, using a standard 6-inch telescope. ‘I bought the telescope at Christmas just to look at planets, and didn’t do very much with it,’ he explains. He ordered a charge coupled device, or CCD, camera just as lockdown began, as well as a special optic to put on the telescope to convert it for astrophotography. Now he spends evenings shooting the night sky.

He anticipates that the pandemic will create a renewed appreciation of, and focus on, automation in the lab. ‘Covid might help accelerate something that chemists should really get to grips with a bit more, and that is to question how much manual work is needed in the laboratory nowadays,’ he says. While not a believer in taking away jobs, Cronin says that building technologies to help scientists understand how the universe works and also give them more time to think can only enhance the world. Such tools can also help labs maintain social distance when they are back online, he adds.