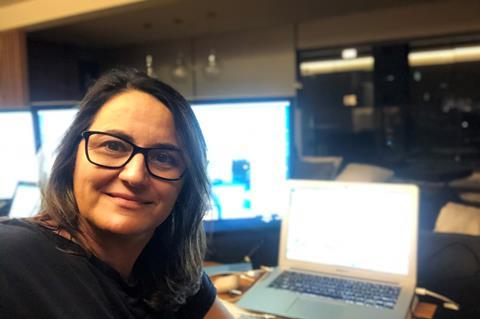 Liane Rossi considers herself fortunate to be working comfortably from home

Liane Rossi runs a nanomaterials and catalysis chemistry lab at the University of São Paulo, located in Brazil’s financial centre and one of the world’s most populous cities that she expects to be among the last in the country to reopen. The pandemic struck Brazil in late February, and Rossi’s lab – which averages between 10 and 15 researchers – closed down in mid-March. ‘Everybody wants to go back to work but we don’t know when,’ Rossi says.

The university switched to online teaching at the beginning of March, and the research labs continued to operate for a few weeks before they too were locked down, except for those doing work related to fighting Covid-19.

‘At the moment, everything in my lab is paused,’ Rossi says. The major issues in closing were ensuring that the mass spectrometers were shut down, and that all gases into the lab were turned off. Lab technicians are conducting regular safety checks to make sure that equipment and stored materials are in good condition and that there is no water leakage.

The head of the chemistry department sends Rossi and other lab directors a weekly report on the status of the labs. ‘One of my concerns is power failures, or blackouts, that can occur during rain or wind storms, and are quite common in Brazil,’ she says.

Teleworking since 17 March, Rossi is currently teaching two undergraduate courses online – general chemistry and inorganic chemistry – and is also running mandatory seminars for graduate chemistry students remotely. The students present their seminars using Google Meets, and there are usually there about 50 people participating.

She is communicating with her team members virtually, meeting through online platforms like Zoom. For remote instruction, Rossi is using the open-source learning management system Moodle.

Since classes went remote, undergraduate attendance has been spotty, according to Rossi. These courses typically have about 70 students, but the live online classes usually have between 20 and 30 people logged in. ‘In Brazil, internet access at home can be an issue for our students,’ she explains. ‘Families also share a computer sometimes’. Because of this situation, Rossi records and archives her lessons so that students can watch them later. She also has a live follow-up class three days later so those able to participate can have their questions answered.

One positive development is that funding agencies in Brazil recently added two or three more months to ongoing research fellowships. ‘That means that the students have more time to finish their PhDs … they are less stressed now,’ Rossi says. Half of her students have two-month extensions and the rest have three-month extensions, depending on the particular funder.

At home in San Paulo with her husband – a chemist who works for a Scottish company that produces and sells gas generators and must go into the office he manages some days – Rossi considers herself very lucky. She is able to live comfortably right now.

Brazil has the second highest number of confirmed Covid-19 cases globally, at over 550,000 and more than 31,000 related deaths, as of 2 June. In fact, the country has the fourth-highest death toll from the novel coronavirus in the world.

‘These numbers will continue to grow because social distancing in Brazil can be very difficult,’ Rossi warns. ‘A very small percentage of the population that is upper or middle class can easily do social distancing,’ she adds. ‘The main problem involves the lower classes who can’t stop working, because then they will have no money to eat tomorrow … and the financial help they need from the federal government is arriving very late.’

The political situation in Brazil is ‘as bad as the virus’, according to Rossi. The major difficulty, she says, is that the country’s far-right president Jair Bolsonaro and his team are focused primarily on the economy, fighting governors and mayors who are trying to stop the spread of Covid-19 through social distancing rules.

Meanwhile, there is an upside to being stuck at home. Rossi is doing more cooking and rather enjoying it. She’s also cleaning, but finds that less pleasant. ‘We had become lazy because we had someone to help us with these home activities, but we are surviving,’ Rossi says. ‘My husband took pictures of me cooking and cleaning and sent them to her.’

Once the virus is under control and her university reopens, Rossi doesn’t know what the new normal will look like. She suggests that shifts might need to be set up for students and researchers in order to maintain social distancing, and that there may no longer be large lecture classes. In addition, she expects that scientific conferences will continue to be put on hold.