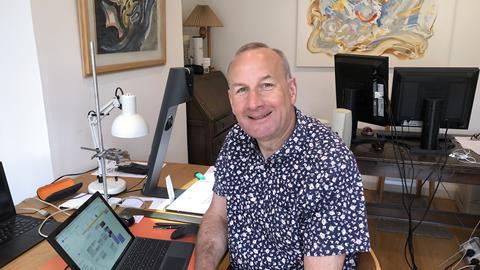 The head of Cambridge’s chemistry department says its research has been ‘mothballed’, and he worries about lost productivity

Research at the University of Cambridge is at a standstill, and faculty are waiting to hear whether the university will have to furlough, according to James Keeler, who heads the university’s chemistry department.

‘We have mothballed the department, so there is no research going on at all,’ Keeler says. He estimates that the department hosts about 300 researchers, including postdocs and the PhDs.

Right now, the building is just being maintained to ensure that things are secure while vacant. Keeler is helping to oversee that process, so he goes into the building one morning a week to keep an eye on things. A small number of people are also coming in to check on items like glove boxes, cryophiles and nuclear magnetic resonance spectrometers (NMRs).

‘There are quite a lot of people with gloveboxes doing air-sensitive work, so those are still running and they are maintained and regularly inspected to make sure that things are okay,’ Keeler explains. Some researchers involved in stem cell work are also coming in to maintain their cell lines and keep them going, he says.

Otherwise, the main shutdown tasks were to properly dispose of lab waste, ensure that all the taps are switched off, and pull down the fume sashes, according to Keeler. Most of the equipment like mass spectrometers and NMRs were left running. ‘It wasn’t a huge problem to mothball,’ he recalls.

There are significant consequences to shutting down the department’s research. ‘One problem is just the loss of productivity,’ Keeler says. For example, postdoctoral researchers are typically on relatively short-term contracts, and losing that research productivity is a real problem for them. In addition, PhD students have a finite time to complete their theses.

‘Even if there is compensation for the time – and there is an indication that some of the research students, particularly in their final years, will get some additional time – you have got that loss of momentum,’ Keeler explains. It remains unclear whether such students will be able to recoup these months of lost time from funding agencies.

Currently, Keeler is communicating with colleagues in his department through email, as well as Zoom, Microsoft Teams and Skype. In fact, they recently completed a staff appointment virtually, which was a new experience. The hiring committee was at the shortlist stage when the shut down happened in March, so the candidates were invited to one-to-one online meetings, and they were asked to deliver seminars online. Following electronic panel interviews, the new faculty member is expected to start work in October.

Meanwhile, about a week before the shutdown another faculty member started her job in the chemistry department. ‘As an introduction to your first faculty position, “this is your office, by the way get out” is a bit weird,’ Keeler states. ‘She seems to be taking it well, I imagine it must be quite difficult.’

Cambridge cancelled all in-person classes on 13 March, when the term ended, and courses started up again online the week of 21 April. It has been decided that first and second year students will be excused from end of year exams, while third- and fourth-years will take them online at a specific time.

They will have three hours to complete the exams, plus extra time to upload them. However, final marks can be no worse than the previous year. ‘If you got a first last year, and you sit the exam this year and you don’t get a first, you nevertheless will be awarded a first,’ Keeler explains.

At the moment, Keeler is self-quarantined at home with his partner, who also works for the university. One of the hardest things is that he can’t visit his elderly mother. He last saw her in the mid-March. ‘She’s got what she needs, she is fine, but people can’t go and visit her and she can’t go out,’ he says. ‘That is quite difficult.’

Keeler keeps his spirits up by running, which he now has more time to do, and relaxing in his garden. He is also enjoying a wide assortment of television programmes from Netflix, the BBC, and Studio Ghibli.

He says Cambridge is essentially shut down, even though East Anglia has had a relatively low incidence rate of Covid-19 compared with other areas of the UK, like London. ‘It is just completely bizarre,’ Keeler says. ‘If you go into the centre of the city, which at this time of the year is normally heaving with tourists, you could lie down in the middle of the road without any danger of being run over.’ Only food shops and the pharmacies remain open. ‘There is literally no traffic on the streets – it is just amazing,’ he says.

This whole experience will make researchers re-examine how much travel they were doing, Keeler predicts, and he says that’s a good thing. ‘The amount of academic travelling, in my opinion, is completely ridiculous,’ he says. He notes that academic travel is a significant part of the university’s carbon footprint.