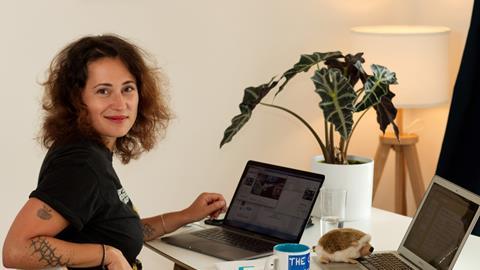 Chemistry World is checking in with chemists around the globe to see how they are weathering the Covid-19 pandemic.

Anya Gryn’ova is a junior group leader in computational carbon chemistry at Heidelberg Institute for Theoretical Studies (HITS) in Germany. The Ukrainian native who has spent her adult life living in the US, Switzerland and Australia, says there’s nowhere else she’d rather be right now than Germany.

The management of HITS, which is a non-profit organisation affiliated with Heidelberg University, made the decision to close in the second week of March, as Covid-19 restrictions were introduced across much of Germany. Only those deemed essential, like security and administrative staff, were allowed to come to work once every one to two weeks.

It is not over yet, but Germany has managed this spectacularly well

But Gryn’ova says her team’s work wasn’t disrupted. The group – which currently consists of two PhD students, one postdoctoral researcher and an intern – never stopped its work. ‘Our scientific agenda didn’t suffer too much because, being theoretical scientists, all of the work is done remotely on supercomputers,’ Gryn’ova explains. ‘So, as long as you have Internet access and a laptop or workstation, in principle you are able to do the same work.’

Her team’s biweekly or monthly group meetings transitioned to weekly online meetings via Heidelberg University’s web conferencing system. They also used the same platform to hold monthly digital group meetings where researchers took turns presenting their work to one another.

As with most of the institute’s researchers, Gryn’ova is still working from home. But she recently began coming into the office once or twice a week for one-on-one meetings. In early June, Germany started slowly lifting its restrictions, so she and colleagues began having face-to-face group meetings on campus every two weeks. They wear masks in the building’s corridors and doorways, and are able to maintain social distancing rules in meeting rooms.

Several new measures have also been put in place to minimise the risk of Covid-19 transmission. For example, the air conditioning units no longer recycle air, and there is a one-way system in the buildings. And there is a ban on business trips and visitors, including guest speakers, as well as live seminars for more than five or six people.

However, HETS is currently reviewing these policies, and if the pandemic continues to remain under control in Germany, they could be ditched in September.

Meanwhile, Gryn’ova just finished teaching an applied computational chemistry course at Heidelberg University for master’s degree students, entirely online. ‘The semester started in late April, and by that time it was clear that the pandemic was in full swing,’ she recounts. As an advanced special lecture course, no monitored exam was required, and instead the final grades were a combination of several take-home exams and presentations delivered online.

In fact, the only impediment to Gryn’ova’s research during the pandemic has come from a computer virus: a cyberattack that targeted supercomputing facilities in Germany and across Europe in May. These security incidents infected the machines with cryptocurrency mining malware.

‘That proved to be a much bigger disruption in terms of work than the novel coronavirus,’ she recalls. Her institution’s in-house computing facilities were unaffected, but Gryn’ova’s team relies on a large quantum chemistry cluster that is part of the Baden Wuerttemberg high-performance computing infrastructure, and this was shut down for several weeks as a result of the security breaches.

Overall, Gryn’ova says Germany has ‘brilliantly’ handled the pandemic. ‘Of course, it is not over yet, but both Germany’s government and population managed this spectacularly well – they took the situation seriously in early March when it started to unravel with Italy,’ she states.

‘There was a general sense of cool and calm trust in the regulations from the state and local government,’ Gryn’ova continues. ‘There was a very clear plan in place that was well-communicated at the city level … and the state level.’ As of 13 August, there were about 221,000 cases of Covid-19 and approximately 9,200 associated deaths in Germany, according to Johns Hopkins University data. Fatalities in the country linked to the virus have generally remained in the single digits since before the start of July.

Gryn’ova lives alone in her Heidelberg apartment, and when the lockdown was at its height she kept up her spirits by taking hikes with friends, and participating in online trivia games as well as virtual happy hours nicknamed ‘Quarantine bar’ with friends from all over the world. She even finally learned to ride a bike, at age 33.

Gryn’ova thinks the pandemic will have also a positive impact on science research culture. ‘It is painfully obvious now that it is not necessary to travel so much,’ she states. ‘The chemistry community is questioning the necessity of holding conferences in fancy places.’ And she notes that many professors are reassessing the need for physical lectures, and considering a more hybrid model for their courses. Less travelling, Gryn’ova notes, will also be better for the environment.