Work hasn’t slowed for the head of a Caltech synthetic organic chemistry lab, but now she’s doing it from home with her two young children 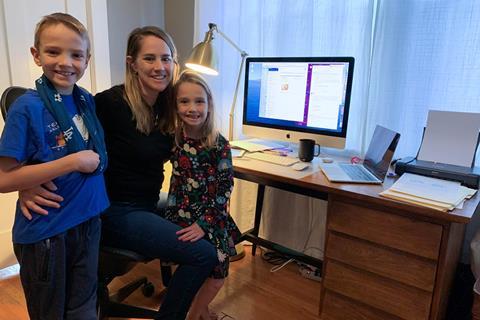 Working from home is a family affair for Sarah Reisman

Sarah Reisman’s chemistry lab at the California Institute of Technology closed its doors last month due to the Covid-19 outbreak. ‘They shut down all “non-essential research” the week of 16 March, and that is the majority of lab work at the university,’ Reisman recounts. Only a few special projects, primarily related to fighting the novel coronavirus, were allowed to continue.

Since that time, Reisman’s entire synthetic organic chemistry group, which includes 15 graduate students and one postdoctoral researcher, has been working from home. ‘We were pretty easy to shut down,’ she recalls, noting that the team had to ensure that its glovebox was good shape before closing. ‘We had to make sure the campus nitrogen supply would not be disrupted, and we had to try to ensure to the best of our ability that some of our chemical intermediates were at stages that they would be stable to store,’ she adds.

Many of her researchers are now spending time converting their manuscripts to thesis chapters, using this quiet period as an opportunity to write the early chapter for their thesis. Some are also helping Reisman with grant proposals and reviews. ‘I have been invited to write different reviews and related contributions that have been sort of languishing, and so I’m trying to finish those up and get them submitted,’ she says.

The group’s first-ever virtual thesis defence occurred in mid-April, over Zoom. The team has been continuing to meet weekly virtually, and Reisman also holds smaller group meetings to keep abreast of what everyone is working on. In addition, she has set up a number of standing online coffee breaks and virtual Friday evening socials to provide opportunities for everyone to connect.

Meanwhile, Reisman is also began teaching a Caltech organic chemistry class via Zoom on 6 April. She is using the interactive white board function on her iPad to teach the course, livestreaming the lessons and also posting recordings. So far, the turnout is comparable to those of her typical in-person classes. ‘It has gone more smoothly than I thought it would,’ Reisman says.

She and her students are not likely to return to Caltech anytime soon, and the summer undergraduate research programme has just been cancelled. California has just extended its stay-at-home order through 15 May. But, Reisman lives in South Pasadena and feels a little bit safer there compared to those in the broader Los Angeles county. In Pasadena, there were 325 lab-confirmed cases and 30 deaths as of 25 April. Across LA, there were more than 19,500 cases, including those reported by Pasadena and other health departments in the area, and 913 associated deaths.

Nearly two months in self-quarantine with her husband and two children has been difficult, but also quite rewarding. Her daughter and son, aged six and eight, have been out of school ever since her lab closed. ‘At least initially, they thought it was awesome and it took a while for our school district to get our distance learning up and running,’ she recalls.

All of her meetings have simply been converted to Zoom, and she still has papers to write and research grant proposals that are due. ‘My work has not slowed down, but now I do it at home with a couple of kids coming in and out all day – which is a blessing and a curse,’ Reisman says.

Her husband, a business developer trained as a chemist whom she met while in graduate school at Yale, is also working from home. She has taken over the better office space, and he has the dining room table.

The main upside to this difficult situation, she says, is the chance to spend more time with family. ‘If I take a break or at lunchtime, and throughout the day, I just get more moments with them that are fun,’ Reisman says. She is also happy to have shed the stress of commuting home in the evenings and trying to get dinner on the table and then kids into bed.

No travel is another thing that Reisman is enjoying. She had been travelling for work about every other week. ‘It is unusual for me to have been home for this long, and it certainly makes me think about how much travel I really want to do once things get started again,’ she says.

In the last few weeks, Reisman has taught herself how to knit, and she’s been practicing that new hobby in the evenings. She has started with scarfs and will move on to a hat soon.