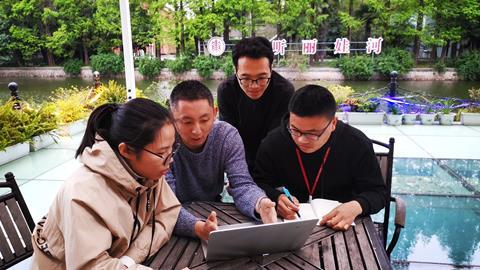 Liang Zhang, a chemistry professor at East China Normal University (ECNU) in Shanghai, returned to the lab he runs in March, having left Shanghai on 18 January to celebrate the Chinese New Year with his family in his hometown of Lanzhou. While he was on holiday Covid-19 hit China, and he ended up having to stay in Lanzhou for over a month. When Zhang finally took the three-hour flight back to Shanghai, his work and personal life had changed drastically.

Upon his return, Zhang was required to self-isolate at home for 14 days before he could seek permission from his university to return there. This situation was not unique. His entire research team had been on vacation when the outbreak shut down Shanghai just as they were supposed to go back to work.

During the quarantine, Zhang hosted regular virtual lab meetings with his team, mostly to discuss developments in their research and newly published literature. At first, they communicated through the Chinese social media platform WeChat, but eventually switched to Tencent Meeting, which is run by a local company that gave researchers and teachers in China free access to their app. To make things easier, ECNU also provided staff with a free Internet boost to avoid connectivity problems during remote instruction or lab meetings.

‘We couldn’t really do experiments, just discuss the direction of our research or some specific projects or new study designs,’ Zhang recalls. Meanwhile, he spent most of that time writing up research grant proposals and trying to guide his team. Their work focuses on using a molecular weaving technique to make polymers, and also on examining entanglements that exist in polymers to determine how they affect their chemical and other properties.

At ENCU, Zhang runs a joint lab of eight researchers with his former supervisor David Leigh from the University of Manchester in the UK. He only formally joined ECNU in mid-January, but since September Zhang had been group manager of a lab Leigh opened at the university about two years ago.

At that time, he was assigned a new lab for his team to move into, which needed to be set up. However, efforts to get the facility ready are on hold due to Covid-19. Delivery of equipment and machinery is stalled because they were purchased from overseas, and the workers who would deliver the items and set up the lab cannot get access to the space without complex negotiations with ECNU’s front office.

‘It is quite complicated because people need access codes and lots of other things to enter,’ Zhang explains. ‘It is just not the right time to ask them to do those things,’ he adds. So for now, the team is housed in the old lab.

Meanwhile, Zhang’s team and others at ECNU are working restricted hours. Before the pandemic, their workday was from around 9am to 8pm, and that has now switched to starting at 10am and generally ending at around 4pm. ‘We can’t work in the evening, only in the daytime,’ Zhang explains. ‘I have asked them not to come to the lab during rush hour.’

There are other constraints as well. ‘In a lab that is 40-50 square metres, I can only have four people working at once,’ Zhang says. ‘It’s like a slow restart for the lab.’

In retrospect, Zhang says his weeks of isolation weren’t too difficult. He played guitar, watched videos, took walks and exercised with his wife. He also had time to have meaningful conversations with his team to fuel their enthusiasm for chemistry and science. ‘I told them science is everywhere so they shouldn’t just focus on the project they are working on, they have to open their eyes to look at the world.’

He says local stores were well-stocked with food and other supplies, and the Chinese government’s ‘very strong policies’ were reassuring. The Chinese government reported that the virus in the country spiked to just under 3900 new confirmed cases in early February and then levelled off to around zero in early March, with the exception of a slight spike in Mid-April. However, he was concerned about his friends and colleagues in the UK and the US, and reached out to them to make sure they understood the seriousness of the situation they would soon be facing.

Although Zhang is back at work, his wife is still at home. She teaches biology to teenagers at a local international school, which will remain closed until at least 27 April. Zhang is enjoying listening to her teaching her courses online from their house. ‘I am learning a lot,’ he says.

There are some positives behind the Covid-19 disaster, according to Zhang. ‘As chemists, we get very busy and then spend less and less time with our families,’ he says. ‘The better life is the simpler life, so if you can make your life simpler you will feel happier.’